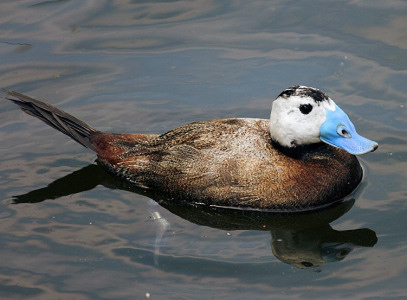 Appearance:
Male - The male White-headed Duck has a white head with a black cap, upperparts are reddish-brown, and upper tail coverts are chestnut brown, with a black tail (which is often erect), a deep chestnut breast with grey-brown abdomen and under tail coverts, the swollen beak is bright blue, and legs and feet are grey.
Female - The female is similar but is more greyish-brown, with a dark brown crown and nape, the cheeks are buff-white with a brown line running across, and the beak is dark grey.

Food: - They dive and swim underwater for seeds and leaves of underwater plants, and pondweeds. They also feed on molluscs, crustaceans, and aquatic insects. 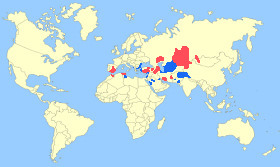 Notes: - The White-headed Duck is a small stiff-tail duck. This duck is on the endangered list due to habitat loss, and hunting. A more recent threat is the interbreeding of the Spanish population with the Ruddy Duck which has rapidly spread over the UK and Europe after being introduced to UK wildfowl collections in the 1940s.