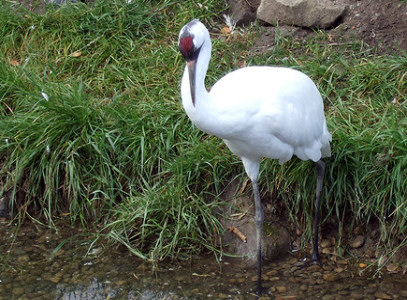 Appearance: - The Whooping Crane has a white plumage with a long neck, red crown, black forehead and facial patch, black moustache on sides of the long pointed black beak, yellow eyes, black primary flight feathers which can be seen in flight, and long dark legs. Both sexes are alike.

Habitat/Range: - Wetlands, swamps, grasslands, salt flats, and marshes in Wood Buffalo National Park in Alberta, Canada. It Winters along the Gulf Coast of Texas. A non-migratory flock has also been introduced to Florida. 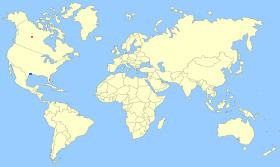 Notes: - The Whooping Crane is the largest species of Crane in North America. The female may lay two eggs but will only rear one chick. This bird is listed as 'Endangered' because it has an extremely small population. Due to conservation efforts it is slowly increasing its numbers and may soon be downlisted to 'Vulnerable'.

This species is listed as Endangered because it has an extremely small population.