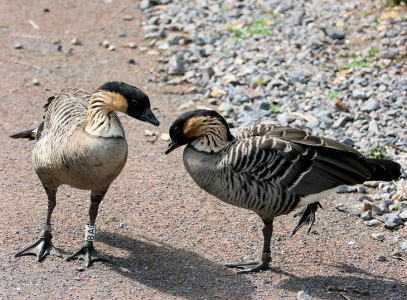 Appearance: - The Hawaiian Goose has a black crown, black nape, black on the front of the face, black chin, buff cheeks and sides of the heavily furrowed neck, and dark ring at base of the neck. The body is grey-brown with upperparts having barred appearance, rump and tail are black. Eyes, beak and legs are black. Both sexes are alike.

Notes: - The Hawaiian Goose is a member of the Branta genus (Black Geese). It is the world's rarest goose. Hunting and predators reduced this species to just 30 birds in 1952, however thanks to leading conservationist Sir Peter Scott, the Hawaiian Goose was bred in captivity at Slimbridge, UK and re-introduced to Hawaii where numbers have now increased. The Hawaiian Goose can be found in captivity at all the WWT centres. The Hawaiian name Nene comes from its soft call. In Hawaii they have an extended breeding season and eggs can be found in all months except May, June, and July, although the majority of birds nest between October and March, and most clutches are laid between October and December.