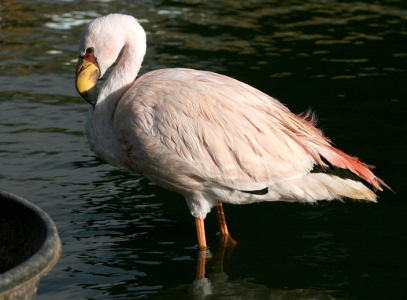 Appearance: - The James's Flamingo has a very pale pink plumage with bright carmine streaks around the neck and back, and also black primary flight feathers. They are distinguished from other species of Flamingo by having bright red skin around the eyes, bright yellow beak with a black tip, and red legs. Both sexes are alike but the male is slightly larger. The Andean Flamingo is similar but is larger, has yellow legs, the paler yellow beak has a more extensive black tip, and its wings have more black in them.