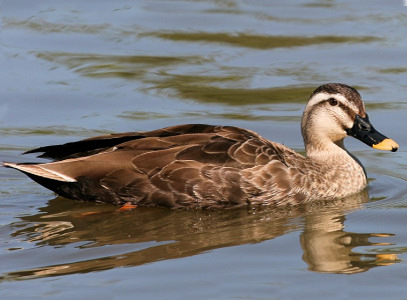 Appearance: - The Spot-billed Duck has a light-grey-brown head and neck with a dark blackish crown and eye-stripe, breast and underparts are pale buff or whitish with brown spots, the back, rump and upper-tail are blackish-brown, wings are whitish with black feathers below with a white-bordered green speculum above and white tertials. The beak is black and tipped with bright yellow and there is a red spot at the base of the beak. Legs and feet are a yellow-orange colour. Both sexes look similar. The Eastern or Chinese Spot-billed Duck lacks the red spot at the base of the beak and has a darker browner plumage (similar to a Pacific Black Duck) and has a blue speculum.