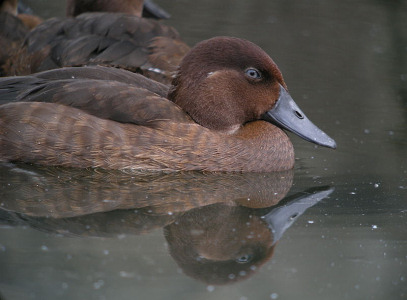 Appearance:
Male - The male Madagascar Pochard has a dark brown head and neck, white eyes, a grey beak, chestnut-brown mottled flanks, blackish-brown upperparts and rump, white belly and undertail coverts, white flight feathers with black tips and dark outer primary feathers, and grey legs and feet.
Female - The female has a duller brown plumage and does not have a white eye.
Eclipse - The male in eclipse plumage is similar to the female but retains the white eyes.

Habitat/Range: - Shallow freshwater lakes, marshes, and open water. It is endemic to Madagascar and found in the Lake Alaotra basin in the northern central plateau. 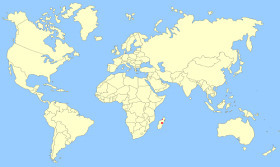 Notes: - The Madagascar Pochard is an extremely rare medium size diving duck which is only found in Madagascar. Before 2006 it was believed to be extinct and it is now believed there are only about 20 individuals remaining. They were relatively common in the 1920s-1930s but declined rapidly in the 1940s-1950s after the introduction of numerous fish species. There are now plans to try and protect these ducks and their habitat.