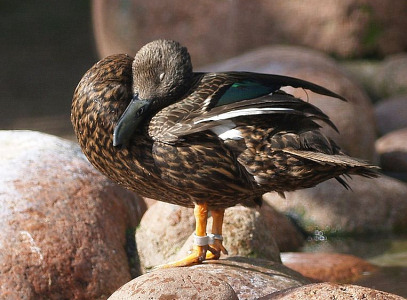 Appearance: - The Meller's Duck looks very much like a large female Mallard. It has a dark-brown streaked head, brown body feathers which have pale fringes, bluish-grey beak, dark-brown eyes, dark-brown wings, a distinctive green speculum which is bordered with white, and legs and feet are orange. Both sexes are similar.

Habitat/Range: - Freshwater lakes, rivers, streams, marshes, and swampy forest areas. This duck is endemic to eastern Madagascar. It was also introduced to Mauritius in the mid-18th century but is now on the verge of extinction due to habitat loss and competition from local feral domestic ducks. 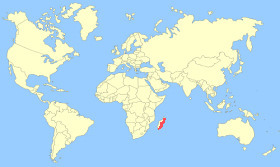 Breeding Season: - Most of the year except May and June in Madagascar. October to November in Mauritius.

Notes: - The Meller's Duck is a large dabbling duck endemic to Madagascar. This duck was named after the botanist Charles James Mellor. It is listed as an endangered species because of large scale habitat destruction during the latter half of the 20th century although there are now a few protected areas on Madagascar and laws against hunting this duck. There is also a captive breeding programme where these ducks are kept in zoos around Europe in case they become extinct in Madagascar.