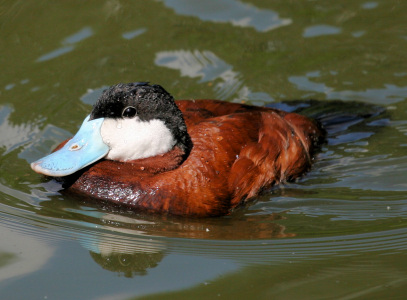 Appearance:
Male - The male Ruddy Duck has a black cap which extends below the eye, black nape, white chin and cheeks, deep-chestnut brown upperparts, upper-breast, and flanks, long dark-brown tail (which is often erect), and silver-white underparts mottled and barred with brown. The beak is bluish, and legs and feet are bluish-grey.
Female - The female has a grey-brown body, with a dark cap, buff-white cheeks with dark brown cheek stripe, the legs, feet, and beak are grey.
Eclipse - The male in eclipse plumage is very similar to the female although the head retains a distinctive dark cap and lighter face. The beak loses its light blue colour and turns grey during the non-breeding season.

Habitat/Range: - Wetlands, marshy lakes, swamps, and ponds in Canada, the USA, West Indies, and the Andes in South America. Winters in southern USA and Mexico. Also well established in the UK and widespread in Europe as a result of escapees from wildfowl collections. 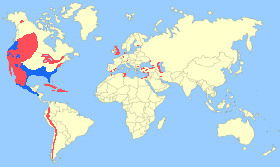