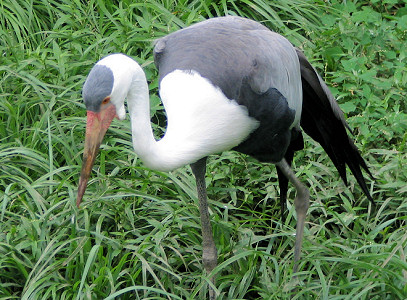 Appearance: - The Wattled Crane is the second largest of the Crane species and has a grey crown, a grey patch around the eye, bare red skin patch from the base of the beak to the eye which is covered in bumps, white face, white feathered wattles which hang down from the upper-throat, red eyes, long pointed beak, the long neck and upper breast are white, grey back and wings with primary wing feathers, long secondaries, and tail coverts being black, and long dark legs and toes. Both sexes are alike.

Habitat/Range: - Shallow wetlands, floodplains, grasslands, and marshes in Ethiopia and south-central Africa including Botswana, and Zambia. 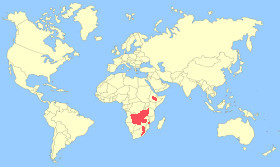 Breeding Season: - May to June in Ethiopia, and July to August in southern Africa.

Notes: - The Wattled Crane is the largest species of Crane in Africa and the second tallest species of Crane after the Sarus Crane. The female may lay two eggs but will only rear one chick. This bird is listed as 'Vulnerable' due to loss of habitat.